[Update 9/11/2018] Official fix for this vulnerability is now available and users are advised to apply Windows Updates, which will automatically result in our micropatch not getting applied any more. You're welcome to read about our comparison between our micropatch and Microsoft's official fix.

Earlier this week security researcher SandboxEscaper published details and proof-of-concept (POC) for a "0day" local privilege escalation vulnerability in Windows Task Scheduler service, which allows a local unprivileged user to change permissions of any file on the system - and thus subsequently replace or modify that file.

As the researcher's POC demonstrates, one can use this vulnerability to replace a system executable file and wait for a privileged process to execute it. In particular, it was shown that a printing-related DLL could be replaced and then executed by triggering the Print Spooler Service to load it. (The latter being a legitimate system operation, only used for demonstrating how replacing a system executable leads to elevated privileges. One could alternatively replace one of a large number of other system executables, or perhaps even a configuration file that gets loaded by a privileged process.)

SandboxEscaper's documentation properly identifies the problem being in Task Scheduler's SchRpcSetSecurity method, which is externally accessible via Advanced Local Procedure Call (ALPC) facility. This method, which can be called by any local process, sets a desired security descriptor (sddl) on a task or folder, i.e., on a provided file path (path).


SandboxEscaper noticed that this method fails to impersonate the requesting client when setting the security descriptor, which results in Task Scheduler changing the access control list of the chosen file or folder as Local System user even if the user calling this method is a low-privileged user. Impersonation is a feature where, to put it simply, a process running as user A gets a request for some action from user B and performs this action disguised as user B, borrowing user B's permissions for that. Task Scheduler is such a process running as user Local System, and when some other user calls its SchRpcSetSecurity method, it should impersonate the caller to perform the file operation using their identity - but apparently it doesn't, and uses its own powerful permissions to do so.

What the POC does to demonstrate this issue is:


The problem is clearly in step #2, which allows a non-admin user to change permissions on a system executable, and one can quickly assess the root cause of the problem to be a combination of two facts:


After running the POC, we took a look at operations performed on UpdateTask.job with Process Monitor, and found the one that changes permissions: 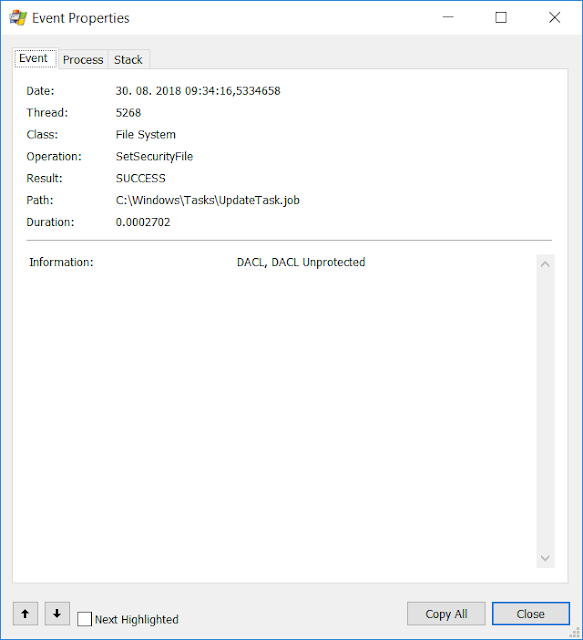 So we took a look at its call stack to see who invoked this action: 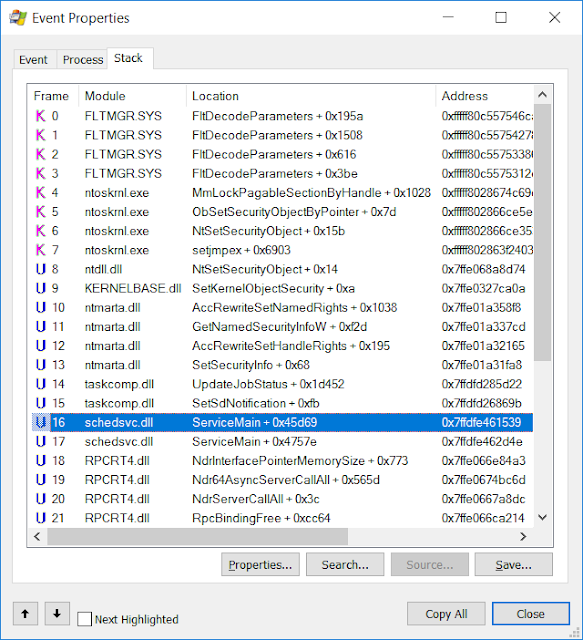 We were expecting to see code without any impersonation here, but actually found impersonation being used - just that the call that sets file permissions is done before the impersonation (in the lowest code block) begins.

The plan was clear: let's begin impersonation before the offending call to make sure that said call will be impersonated. So we created a micropatch with a single patchlet containing a call to RpcImpersonateCient and placed it at the beginning of the block preceding the orange block. How about reverting the impersonation? It turns out that wasn't needed because all code execution paths were leading directly to another impersonation call without making any other kernel calls that might be affected by our impersonation.

We tried this micropatch, but the exploit still worked !?! What was going on?

It turned out that there is another permissions-setting call in function RpcServer::SetSecurity, possibly a fallback mechanism in case the first one failed. So we made the first one fail, and the second one came to the rescue - again without impersonation (the middle orange block). 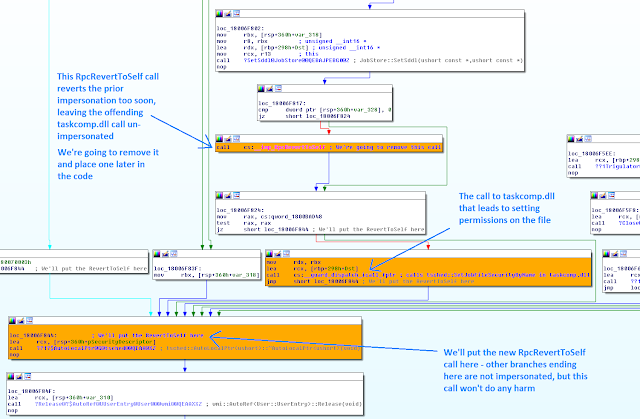 In this case, we can see a call to RpcRevertToSelf right before the offending call, which means that previous impersonation was reverted too soon to include the said call.

What we did here was remove the premature RpcRevertToSelf call and insert a replacement RpcRevertToSelf call to the code block following the offending call. While this block has many other branches leading to it, we checked that these are not impersonated which means our inserted call won't erroneously prematurely revert some other impersonation.

So finally, our micropatch worked and Process Monitor showed this instead: 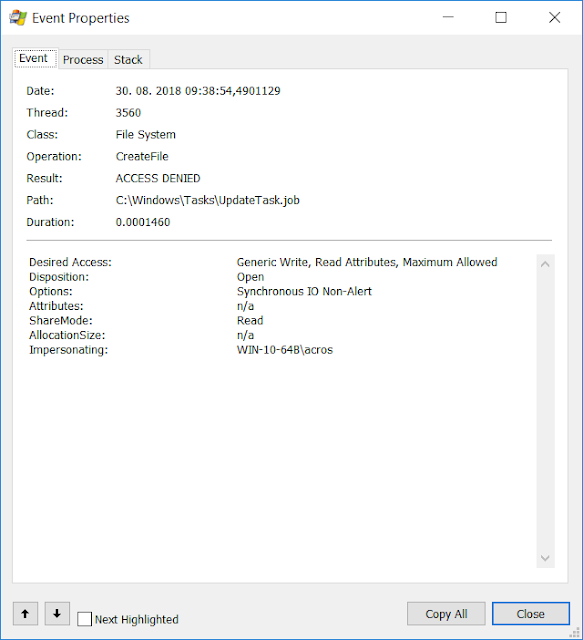 You can see the "Impersonating" line, proving that we have successfully forced Task Scheduler to impersonate the calling user when trying to set permissions on UpdateTask.job. Now, since this file was a hard link to another file which our user had insufficient permissions to modify ACL for, the result was ACCESS DENIED, as it should be.

This is the source code of our micropatch, with all of its 4 instructions in three patchlets:


Q: Which Windows versions does this micropatch apply to?

Currently we have instances of this micropatch applying to:
[Update 9/6/2018] Big thanks to Will Dormann for confirming the vulnerability as well as effectiveness of our micropatch on Windows Server 1803 in a real-time Twitter DM session!

We can quickly port the micropatch to other affected versions but we'll only do that on request (support@0patch.com). As far as we know at this point, the vulnerability was confirmed to also be present and exploitable on 32bit Windows 10 and 32bit Windows 7, so it's safe to assume that at least all Windows versions from Windows 7 and Windows Server 2008 are likely affected.


Q: Will modifying the exploit allow attackers to bypass this micropatch?

No, and that's one of the significant advantages of changing the code compared to signature- or behavior- based exploit prevention systems. For instance, while most antivirus products will detect the original POC by now, Will Dormann modified the POC and showed that it went undetected. Such modifications always allow for bypassing detection-based systems, while fixing the code actually removes the vulnerability. There is simply nothing there to bypass. There is no more efficient and reliable way to address a vulnerability than to actually remove it. (Although the entire industry built around vulnerabilities will try to convince you otherwise.)


Q: How do we apply this micropatch?

If you have 0patch Agent already installed, this micropatch is already downloaded and applied so you don't have to do anything. Otherwise, download and launch the 0patch Agent installer, create a free 0patch account and register the agent to that account. You will immediately receive all micropatches including this one, and it will automatically get applied to Task Scheduler.


Q: Is this patch functionally identical to how Microsoft will fix it?

Obviously we can't know that. As we always claim, the original vendor - with their internal knowledge of the product - is best-positioned to correct their own code. Nobody else knows all the possible side effects of a code change as well as they do (granted, with large products even they often don't see everything) and in an ideal world software vendors would be issuing micropatches like this to quickly and painlessly fix vulnerabilities. That said, Microsoft may do the same as we did, but they may also prevent Task Scheduler from changing permissions on hard links. Or they may find that they need to support hard links and not impersonating the user is essential for some other operation that Task Scheduler performs - and will make a substantial code change. We often create micropatches after the vendor has issued the official update, which allows us to see what they did and ideally replicate their logic in a micropatch. With a 0day, this is obviously not possible.

You should therefore consider our micropatch a temporary solution while waiting for the official fix.

Q: What will happen on Patch Tuesday?

When Microsoft makes their official fix available, you simply apply it as you would if you had never heard of 0patch. Applying it will automatically obsolete this micropatch on your computer as the update will replace a vulnerable executable with a fixed one, thereby changing its cryptographic hash. Since our micropatches are associated with specific hashes, this will make the micropatch inapplicable without intervention on either your end or ours.


Q: Can we keep using this micropatch instead of applying Microsoft's update?

We strongly recommend against that. Microsoft's update will not only fix this issue in a more informed way, but will also bring fixes for other vulnerabilities that we don't have micropatches for. Yes, we hate losing hours of our lives to updating our systems too, but wouldn't dream of outright replacing official updates with our micropatches ;)


Q: How can you provide a micropatch so quickly compared to original vendors?

While having a micropatch candidate ready 24 hours after a 0day was dropped is quick relative to today's standards of software patching, a couple of things must be considered:


All that said, comparing our speed with software vendors' must also account for the difference in our deliverables. A micropatch can be quickly created, deployed to all computers in a hour's time and applied without even the slightest disturbance to users. But it must be considered a temporary security measure until the official patch can be applied.


Q: What should we do if we encounter problems with Task Scheduler after applying this micropatch?

Obviously we can't guarantee that our micropatch won't cause some unwanted side effects, e.g., with non-admin users editing existing scheduled tasks under certain circumstances. (Then again, software vendors can't guarantee that either.) The rule of thumb for using 0patch (or any other 3rd party behavior-changing product like antivirus or malware blockers) should be to first disable the agent and see if the problem persists, before contacting the original software vendor for the affected product. If the problem persists, the culprit is unlikely to be the micropatch. If the problem goes away, it's probably us and we'd like to hear from you at support@0patch.com.

Fortunately, in contrast to standard "fat update" patching that software products employ today, 0patch allows you to instantly revert a patch with a click of a button.