We can't fix what we don't know, but we can block exploitation in a highly convenient way 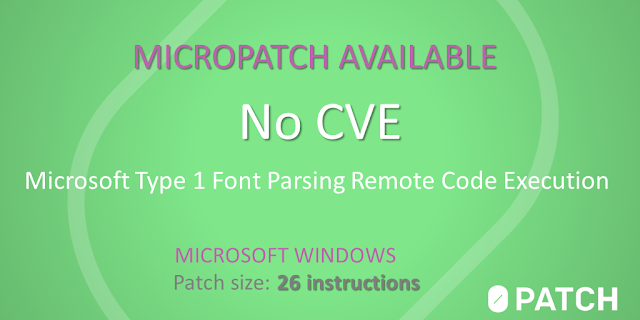 Three days ago, Microsoft published a security advisory alerting about two vulnerabilities in Windows font parsing, which were noticed as being exploited in "limited targeted Windows 7 based attacks." These vulnerabilities currently don't have an official vendor fix.

As we've done before in a similar situation, we decided to provide our users with a micropatch to protect themselves against these vulnerabilities in a "0patch fashion", i.e., completely automatically and without disturbing users even in the slightest.

Our micropatch is currently available for fully updated Windows 7 64-bit and Windows Server 2008 R2 without Extended Security Updates (ESU), which means with January 2020 Windows Updates installed. This provides protection for our users who continue using these Windows versions but were unable or unwilling to obtain ESU, and are now, somewhat ironically, the only Windows users with a patch for these vulnerabilities.

[Update 4/3/3020: We ported this micropatch to Windows 7 and Windows Server 2008 R2 with Extended Security Updates applied.]

Update: Microsoft issued an official fix for this issue with April 2020 Windows Updates and assigned two CVE IDs to it: CVE-2020-0938 and CVE-2020-1020. Our patches thus ceased being free and now require a PRO license.


What Does Microsoft's Advisory Tell Us?

Microsoft's advisory provides scarce details, for obvious reasons, but here's what we think is important:


Obviously we can't patch these vulnerabilities because we don't know what they are, but we can infer from Microsoft's advisory that blocking Adobe Type 1 PostScript fonts from reaching the vulnerable kernel parsing code would block attacks.

So we decided to find the common execution point that various Windows applications such as Windows Explorer, Font Viewer, and applications using Windows-integrated font support are using to pass a font to Windows, then place a bouncer there that would keep Adobe Type 1 PostScript fonts out.

Windows are offering font-related functions under the Windows graphics device interface (GDI), most notably the AddFontResourceA function and its extended and wide character siblings. Looking into their implementations, we found they all end up calling an undocumented GdiAddFontResourceW function, which in turn calls NtGdiAddFontResourceW. The latter makes a system call to transfer execution to the kernel, whereby register rcx points to the font path string provided by the application.

Our plan was then simple: we would inject our patch right before the syscall instruction in function NtGdiAddFontResourceW, where it would look for any occurrences of ".pfm" or ".mmm" in the font path string - and bypass the syscall if any were found. In order to make this comparison case-insensitive (we wouldn't want attackers to bypass our patch with a font file named malicious.PfM, would we?), we would first change the entire font path string to upper case, and then search for ".PFM" or ".MMM". While this simple check would also block non-Type-1-PostScript font files containing ".PFM" or ".MMM" elsewhere in their filenames (e.g., OpenType.MMMregular.otf which I've just made up for illustration), we decided to rather keep the patch code small and not account for such unlikely cases.

This is the micropatch we created for 64-bit Windows 7 without ESU:

With this micropatch in place, all applications using Windows GDI for font-related operations will find any Adobe Type 1 PostScript fonts rendered invalid and unable to load. For example, Windows Explorer will start looking like this when viewing a folder with a pair of otherwise valid PFM and PFB files:

Of course, other types of fonts, including OpenType fonts, remain valid.

Here's our micropatch in action:


Q: What are advantages of your micropatch compared to Microsoft's recommended workarounds?

Our micropatch requires zero user interaction for existing 0patch users - they do not even need to know there is some vulnerability out there and that they should do something to neutralize it. For Enterprise users, deploying this micropatch is as simple as enabling it in 0patch Central and waiting for 0patch Agents to sync. (Disabling it is just as simple, should it be needed.)


Q: Any disadvantages of your micropatch compared to Microsoft's recommended workarounds?

Renaming ATMFD.DLL or disabling ATMFD via registry makes the vulnerability unreachable even for a local attacker who has ability to execute low-privileged arbitrary code on the computer. Our micropatch doesn't protect against a local attacker: they can write their own program that makes a direct system call to the kernel and thereby avoid our micropatch. Our micropatch protects against remote attack vectors.


Q: Will Microsoft provide a patch for these vulnerabilities to Windows 7 and Windows Server 2008 R2 users without Extended Security Updates?

Microsoft's advisory clearly states that they won't. This makes our micropatch especially important for 0patch users on these Windows systems. We at 0patch have committed to provide post-end-of-service security micropatches for Windows 7 and Windows Server 2008 R2 for three additional years. (Read FAQ for more information.)


Q: What will happen if I apply your micropatch, and then apply Microsoft's patch for these issues when it comes out?


Q: Is this a PRO-only micropatch, or is it also available to 0patch FREE users?

To help people and organizations in these difficult times, we decided to make this micropatch available to everyone, so it is included in 0patch FREE until Microsoft issues their official update. At that time, we'll limit availability of this micropatch to 0patch PRO license holders. (And, as always, recommend everyone to apply the official update.)