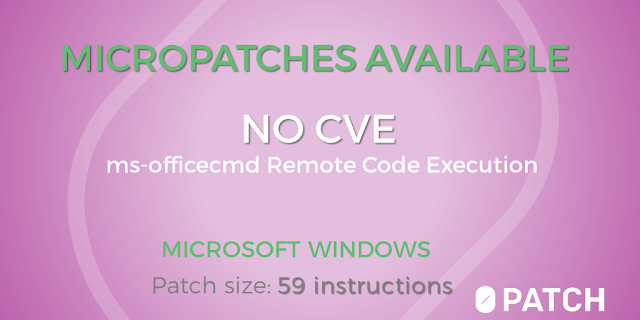 Update 1/5/2022: Microsoft changed their mind and issued a CVE ID for this vulnerability: CVE-2021-43905. The latest version of LocalBridge also no longer recognizes the ms-officecmd: URI scheme.

Earlier this month, security company Positive Security published a detailed analysis of a critical vulnerability they had discovered in the handling of the "ms-officecmd" URL handler. In short, this vulnerability allowed a remote attacker to execute arbitrary code on user's computer when user visited a malicious web page with a browser or opened a link provided to them in documents or messaging applications.

Positive Security have responsibly reported this bug to Microsoft, who fixed it without assigning it a CVE ID, reportedly because "Changes to websites, downloads through Defender, or through the Store normally do not get a CVE attached in the same way. In this case the fix did not go out through Windows Update."

Having a fix delivered though an alternative mechanism instead of Windows Update is not unprecedented in Windows, but can depend on assumptions that may not always be true. In this case, the fix was delivered through Windows Store - but only if the AppX Deployment Service was running. This service (AppXSVC) is enabled on Windows 10 by default and gets started when needed, but a quick Google search finds many people asking how to disable it, some presumably doing so. In addition, there is no need to have Windows Store working on users' computers in a typical enterprise environment, and in fact Microsoft provides instructions for blocking such access.

The situation is therefore such that a remote code execution vulnerability with no CVE ID assigned and official fix issued may have remained unfixed on an unknown number of computers worldwide. To make things worse, the DLL that was fixed (AppBridge.dll) has no version information, making it hard for anyone to determine whether their computer is vulnerable or not.

The vulnerability is nicely described in Positive Security's blog post, so let's just focus on the crux here: various Windows applications such as Office, Teams or Skype register the "ms-officecmd" URL handler, which makes it possible to launch these applications by simply opening a URL provided in a hyperlink or visiting a web page. This handler parses the entire URL to determine which application is to be launched, and which file it should open.

This filename value in an "ms-officecmd" URL is problematic because it gets passed on to the launched application in form of a command-line argument. An application may, however, happily accept various additional arguments, and the vulnerability in question allows these to be sneaked in through the filename value. Teams, for example, is an Electron-based application and accepts the --gpu-launcher argument that launches any other app - as specified by the attacker.

Consequently, visiting a malicious web page while having Teams installed could launch malware on your computer. Whether you would have to okay a not-too-security-alert-looking dialog or not depended on the browser.

After this fix was issued, Positive Security researchers found it to be incomplete, still allowing for argument injection with web-based filenames, such as launching Word with the /q argument like this:

Fortunately, at least Teams won't launch with a web-based URL argument like this but since many Office applications can be launched via "ms-officecmd" URL, the remaining exploitability of this issue can only be assessed with extensive analysis.

Our approach at this issue was more classic in terms of preventing injections. We replicated Microsoft's 2nd code change, enclosing the entire filename value in double quotes before it gets sent to ShellExecute, but we also added a check for existence of double quotes in the filename value and flat out refuse to launch the application if any are found. A double quote cannot be part of a Windows file name (it's one of the forbidden characters), and if someone wants to use double quotes in a web-based URL, they should encode them as %22.

Our patch was written for 32-bit and 64-bit AppBridge.dll that was delivered to Windows machines through Windows Store in October 2020. This is the last vulnerable version, and was subsequently replaced with a fixed version in June 2021. Our patch will therefore only get applied if you had Windows Store enabled in October 2020, and disabled it some time before June 2021. We expect some users may have older, or much older, versions of AppBridge.dll installed due to having disabled Windows Store earlier. In absence of AppBridge.dll version information, we can only recommend locally testing your exploitability by copy-pasting the following URL to your web browser on a machine with Microsoft Teams installed, and seeing if a calculator gets launched:

Here is a video showing how 0patch prevents the above URL from launching calculator.

This micropatch requires a 0patch PRO or Enterprise license as it cannot be considered a 0day anymore. To determine if it applies to your computer at all, you can install 0patch Agent with a free account and see if the patch appears under relevant patches.

If you're not sure whether you're vulnerable or not, try to locate AppBridge.dll on your computer: it should be in a folder like C:\Program Files\WindowsApps\Microsoft.MicrosoftOfficeHub_[version]_x64__8wekyb3d8bbwe. (Note that the folder is only accessible to admins so running a full disk search as a non-admin user won't work.)

Once you've located the file, contact us at sales@0patch.com and provide the exact file size and modification date of file AppBridge.dll and the name of the folder you found it in. For the record, the vulnerable AppBridge.dll on our test systems was in a folder version 18.2008.12711.0.

We'd like to thank researchers from Positive Security for finding this issue and sharing details, which allowed us to create a micropatch and protect our users. We'd also like to thank Will Dormann for additional analysis of this issue.
To learn more about 0patch, please visit our Help Center.
No comments: Update 12/21/2021: Microsoft provided an official fix for this issue on December 14, and assigned it CVE-2021-43883. Our associated micropatches thus ceased being free and now require a PRO license.

Wow, this is the third 0day found by the same researcher we're patching in the last two weeks.

Ten days ago, Abdelhamid tweeted a link to their GitHub repository containing a proof of concept for another unpatched vulnerability in Windows Installer. The vulnerability allows a local non-admin user to overwrite an existing file to which they do not have write access, and then arbitrarily change its content. This can easily be turned into local privilege escalation by overwriting a trusted system executable file with one's own code - as demonstrated by Abdelhamid's POC, which launches a command line window as Local System.

According to Cisco Talos, this vulnerability is being exploited in the wild.

Note that this 0day is being referenced by multiple sources as a bypass to CVE-2021-41379, but the researcher who found it claims that is not the case.

The vulnerability lies in the way Windows Installer creates a RBF (Rollback File), a file that stores the content of all deleted or modified files during the installation process, so that in case rollback is needed, these files can be restored to their originals. The RBF file is created either in folder C:\Config.msi or in folder C:\Windows\Installer\Config.msi, based on some logic that we admittedly don't fully understand. In any case, should the RBF file be created in folder C:\Windows\Installer\Config.msi *, it later gets moved to a known location in initiating user's Temp folder where the files' permissions are also modified to give the user write access. Abdelhamid noticed that a symbolic link can be created in place of the incoming RBF file, which will result in moving the RBF file from  C:\Windows\Installer\Config.msi to some other user-chosen file on the system. Since Windows Installer is running as Local System, any file writable by Local System can be overwritten and made writable by the local user.

It doesn't take a lot of imagination to see that taking over an executable file that is being used by a privileged process can get one's code executed with such process' privileges. This Twitter thread by Will Dormann provides various options to achieve the same.

* In case the RBF file is created in C:\config.msi, the described file move does not take place, and the exploit can't work. Interestingly, Abdelhamid's 0day we had fixed in January was targeting the other rollback file, RBS or Rollback Script, which - to the contrary - had to be created in C:\Config.msi instead of in C:\Windows\Installer\Config.msi, to be exploitable. Things are weird in the Windows Installer world.

Our micropatch targets the RBF file move operation, whereby it checks that the destination path does not contain any junctions or links. If it does, we consider it an exploitation attempt, and the operation is canceled. The original code then "thinks" the file move operation has failed for some reason.

Here is the video of our micropatch in action. Without the micropatch, exploit works and a command line window is launched as Local System; with the micropatch, the code we correct in msi.dll determines that destination path contains a symbolic link, aborts the file move operation and triggers an "Exploit blocked" event.

Windows 7 and Server 2008 R2 without ESU (Extended Security Updates), which we have security-adopted, do not appear to be vulnerable.
Note that Abdelhamid's POC also works on Windows 11 and likely Windows Server 2022, but we don't support these Windows versions yet.
Micropatches for this vulnerability will be free until Microsoft has issued an official fix. If you want to use them, create a free account in 0patch Central, then install and register 0patch Agent from 0patch.com. Everything else will happen automatically. No computer reboots will be needed.
We'd like to thank Abdelhamid Naceri for finding this issue and sharing details, which allowed us to create a micropatch and protect our users.
To learn more about 0patch, please visit our Help Center.
2 comments: