A Kill Switch for Vulnerable jscript.dll 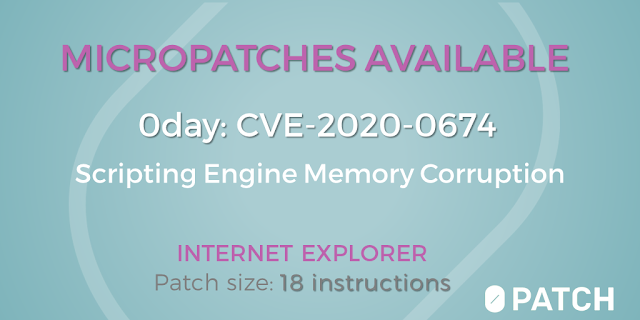 Last Friday, Microsoft published an advisory about a remotely exploitable memory corruption vulnerability (CVE-2020-0674) that was reported to them by Qihoo 360 as being exploited in the wild. These attacks were reportedly limited so Microsoft decided not to rush with issuing a patch but will rather provide one as part of February's Patch Tuesday. They did, however, provide a workaround.

Because the provided workaround has multiple negative side effects, and because it is likely that Windows 7 and Windows Server 2008 R2 users without Extended Security Updates will not get the patch at all (their support ended this month), we decided to provide a micropatch that simulates the workaround without its negative side effects.

Microsoft's workaround comprises setting permissions on jscript.dll such that nobody will be able to read it. This workaround has an expected negative side effect that if you're using a web application that employs legacy JScript (and can as such only be used with Internet Explorer), this application will no longer work in your browser.

There also several other negative side effects:

Microsoft's advisory states that the provided workaround will have to be reverted when they issue a patch for jscript.dll. However, note that some additional side effects may result from changing the ownership on jscript.dll (from TrustedInstaller to the user you're implementing the workaround as).


Finding a test case that triggers the loading of jscript.dll was not difficult - Google Project Zero has one published in an advisory from November last year. (It won't be at all surprising if the vulnerability at hand is either a clone of that one, or a bypass for its patch - but we'll know soon enough.)

So we took Google's example, simplified it to only cause the loading of jscript.dll for executing a single alert call. Note the important part is to specify JScript.Encode as language. (By the way, read the Wikipedia article on JScript.Encode for a primer on how to underestimate intelligent adversaries.)


The test was then simple: opening this file in IE without mitigation or patch should result in a popup saying "jscript.dll was loaded". With a patch, we would want the loading of jscript.dll to fail and consequently no popup to appear. Ideally, in a graceful manner without any ugly error messages or crashed processes.


Sabotaging some functionality is usually a simple thing to do with a micropatch: you locate the code that implements or initializes said functionality, and make it fail. This was a case here too.

We first used Process Monitor to locate the code in Internet Explorer which loads jscript.dll. This was trivial as Process Monitor records a call stack for every operation, and it was obvious that mshtml.dll causes the loading of jscript.dll through a call to CoCreateInstance.


When this code is reached as a result of rendering a Jscript.Encode script block, the first argument (the last one pushed to the stack) points to a ClassID f414c262-6ac0-11cf-b6d1-00aa00bbbb58, which instantiates a jscript.dll object.

Great, could we just sabotage this call and be done with it? Unfortunately not; this same function is being used for instantiating other objects as well, so we need to be selective here.

We decided to make a micropatch that checks, before the call to CoCreateInstance is made, whether its first argument equals f414c262-6ac0-11cf-b6d1-00aa00bbbb58, and if so, sabotages the call by setting its last argument (pvv) to NULL, causing CoCreateInstance to return error 0x80070057 (E_INVALIDARG). This has the same effect as making jscript.dll impossible to read.

But before settling with that, we wanted to check if there were any other ways in which a malicious web page could have code executed by jscript.dll. So we scanned the Registry for all ClassIDs associated with jscript.dll that were loadable via a script tag - and found Jscript.Compact to be such an alternative. So we made another HTML test file:


And sure enough, this one also executed the alert with jscript.dll.We therefore had to add another ClassID check to our micropatch, also preventing cc5bbec3-db4a-4bed-828d-08d78ee3e1ed from getting instantiated.

The final micropatch then became:


We ported this micropatch to the following platforms, both 32-bit and 64-bit:


If you're a 0patch user, you already have this micropatch downloaded to all your online computers with 0patch Agent, and - depending on your settings - already automatically applied to all processes using the Internet Explorer 11 engine for rendering content. This includes Internet Explorer (obviously), Microsoft Word, Microsoft Outlook, and a variety of other applications.

As all our micropatches, you can switch this micropatch on or off and have it instantly applied to, or removed from running applications - effectively making it a "kill switch" for jscript.dll.

If you're using other Windows versions or older Internet Explorer versions and are interested in having this micropatch ported to your systems, please contact us at sales@0patch.com.


Here's our micropatch in action:


Q: Why would we apply your micropatch instead of Microsoft's recommended workaround?

Our micropatch is designed to avoid negative side effects of Microsoft's workaround (see above). It can also be easily reverted (un-applied) with a switch of a button without leaving any traces, while the workaround changes the ownership on jscript.dll.


Q: Will Microsoft provide a patch for CVE-2020-0674 to Windows 7 and Windows Server 2008 R2 users without Extended Security Updates?

We don't know but these systems are now officially out of support and Microsoft has historically only issued security patches for unsupported systems in extreme cases (e.g., the Shadow Brokers leak, or BlueKeep / CVE-2019-0708).

We at 0patch have committed to provide post-end-of-service security micropatches for Windows 7 and Windows Server 2008 R2 for three additional years, which is why we're also issuing this micropatch for these platforms. (Read FAQ for more information.)


Q: What will happen if I apply your micropatch, and then apply Microsoft's patch for CVE-2020-0674 when it comes out?

In any case, you won't have to do anything - Microsoft's patch will have precedence over our micropatch.


Q: I suspect your micropatch is causing problems on my computer. What should I do?

Make a quick test: Disable 0patch Agent and execute your affected process - if the problem is still there, it's unlikely the cause of your problem is our micropatch. However, if your problem goes away, please report that to support@0patch.com and temporarily disable micropatches 402-405 on your 0patch Agent.

Users on the Enterprise plan can enable and disable individual patches centrally through 0patch Central.


Q: Are there any applications using jscript.dll directly (not though Internet Explorer browser component) that could still be used as attack vector?

We're aware of one - Windows Media Player (WMP) uses jscript.dll directly and will still be able to do so when our micropatch is applied. WMP allows displaying a remote web site when playing certain files but the user has to confirm a security warning for that. This was the reason we decided not to micropatch WMP as well.

0patch Central: We are Now Ready to Micropatch Your Enterprise

by Stanka Salamun, the 0patch Team 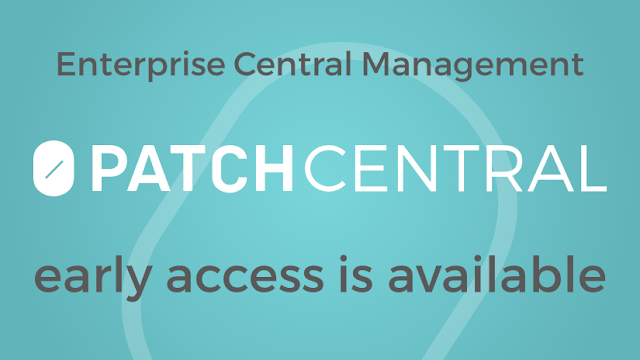 At 0patch, we are on the mission to make your security patching virtually imperceptible:

We do it in the most convenient way you've ever experienced: you don't need to reboot computers or restart applications, you can switch off a potentially problematic patch (and later switch it on again), our micropatches are so tiny that most could be published in a single tweet. They are delivered and applied within an hour of their publication, without any activity on user's or administrator's part. Needless to say, we don't tinker with functionality of your applications: we don't change, add or remove anything (unless it's vulnerable and we can't repair it any other way).

But one of the most common questions we've been receiving from our users lately was: when will your remote central management be ready for enterprises? We are excited to inform you that 0patch Central, our cloud-based enterprise management solution, is now ready to accept first users, and you're invited!

This is a big thing for us, and for all enterprise users asking for central management of their 0patch Agents. If you have a non-trivial fleet of Windows computers to protect with our micropatches, 0patch Central is your central management solution.

What can you do with 0patch Agents remotely?

And how do you set up patching policy in 0patch Central?


Scenario 1: The traditional enterprise "Test in a small group before deployment" setup

1) Open the root All Computers group, open the Settings tab, and set Default state for new patches to "Disabled" - this will result in all newly arrived patches being disabled on all computers in this group.

2) Create a subgroup called Testing, open its Settings tab, and set Default state for new patches to "Enabled" - this will result in all newly arrived patches being enabled on all computers in trhis group.

3) Select and move your testing machines from the All Computers group to the Testing group - these computers will get all newly downloaded patches immediately applied.

4) When you decide that some patch has been sufficiently tested on computers in the Testing group for network-wide deployment, open the All Computers group, Patches tab, locate the patch and set it to "Enabled"


Scenario 2: The "I don't have time for this, just micropatch my 0days immediately" setup

1) Open the root All Computers group, open the Settings tab, and set Default state for new patches to "Enabled" - this will result in all newly arrived patches being immediately enabled on all computers.


You'll find 0patch Central at address https://central.0patch.com, where you can login with your existing 0patch credentials, or register a new account. In case you don't have a 0patch account yet, just register a new account at https://central.0patch.com/auth/register. When you have your 0patch account ready, let us know at support@0patch.com which email address you used so we can issue some trial PRO licenses and turn on the "Enterprise" switch for you. This will allow you to access all Enterprise features such as organizing agents into groups and setting patching policy for each individual group.

If you apply for your Enterprise trial while we are still in "Early Access" you will get your 0patch Enterprise licenses for the price of 0patch PRO for your first yearly subscription. But do not wait too long as we are closing "Early Access" just before Q2 2020 starts.


Important! Remote management only works with our just-released 0patch Agent version (19.11.15.10650) so while you will be able to see your older agents in 0patch Central, you won't be able to do anything with them. To resolve this, please manually update all existing agents to the latest version and make sure to only use the latest agent version for all future installs. All subsequent agent updates will from then on be manageable from 0patch Central.

We tried to design 0patch Central intuitively and with minimal complexity, and hope you won't be needing much help using it. But we're not fooling ourselves. You'll surely have questions and we're anxiously waiting for you at support@0patch.com. Don't hesitate to ask or suggest anything as we want to make 0patch Central a tool that will make your patching life as easy as possible. If something is not obvious to you, it's probably not obvious to others as well, so do let us know about it.

We had to focus on enterprise features first, but next items on our to-do list will be to make life much easier for MSPs and VARs.