We released a new build of 0patch Agent for Windows today. There are two reasons for this: we'd like to test the updating mechanism with our beta users; and we have fixed a couple of issues reported by our beta users, plus a few minor issues we had on our own hit list.

The two issues reported by our beta users were:


Big thanks to Gjoko and Ryan for providing valuable feedback and helping us improve. And they're not the only ones: we're getting great feedback from many other beta users as well, including some issues related to user interface, which we'll address at a later time. Let us reiterate: You guys are the real value of this beta! Thank you!

When your 0patch Agent syncs (which it does once an hour, but you can also force it through 0patch Console), it will detect a new version of itself being available and will inform you about it. All you need to do is open the 0patch Console and click "Get latest version" as shown on the image below. The console will disappear and relaunch after a while, showing the new agent version (2016.06.14.850). 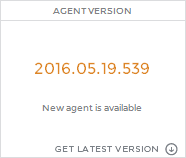 We'll appreciate your telling us about any problems encountered during this update process or elsewhere. Just shoot us a quick email to support@0patch.com (or encrypted with our PGP key to security@0patch.com). Thanks!