How to Micropatch a Logical Flaw

This time I chose to take a look at Microsoft's XML Core Services Information Disclosure Vulnerability (CVE-2017-0022), which allows a malicious web site loaded in Internet Explorer to determine whether specific executable modules or applications are present on user's system or not. It has also been exploited in the wild as some exploit kits (Astrum, Neutrino) were using it to fingerprint victim's machines. Although an official fix has already been released in March, what made it interesting was that it was a logical vulnerability while so far, our team mostly patched memory corruptions.

Based on TrendLabs Security Intelligence Blog I managed to reproduce the PoC. The PoC (image below) checks for the existence of files by calling  XMLParser::LoadDTD with a binary file resource URL as input parameter. If the resource such as version info is found the vulnerable XMLParser::LoadDTD tries to parse it as a DTD but fails and returns 0x80070485 because version info is not a DTD. If the binary file or the resource within does not exist 0x80004005 is returned. 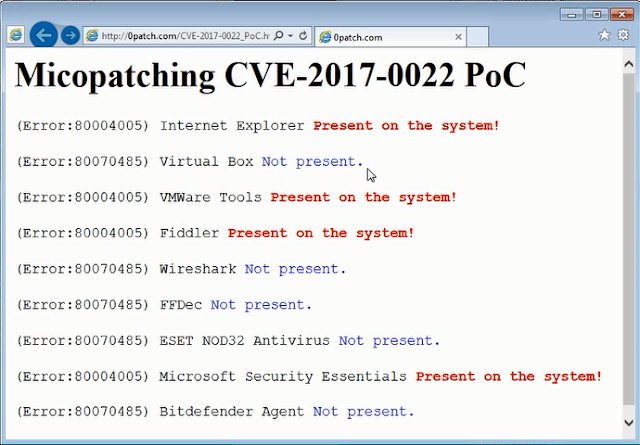 There were enough pointers in the report to easily spot the vulnerable function XMLParser::LoadDTD and make a diff between the vulnerable (left) and the patched version (right) 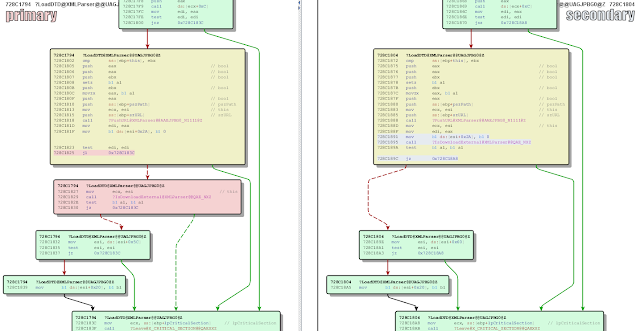 
and created a micropatch that simply jumps over it. However, that did not change the outcome of the PoC. With my micropatch applied, the PoC still returned errorCode 0x80070485 for non-existing files. I then debugged Internet Explorer on a patched machine and found that function IsDownloadExternal following the skipped if also behaves differently. Diffing code graphs for this function showed that quite some changes had been introduced to its implementation:

The gray conditional blocks have been added as part of the official patch. After adding this logic to my micropatch for the vulnerable msxml3.dll, the vulnerability was finally neutralized.

The micropatch has been published and distributed to all installed 0patch Agents. If you want to see it in action, check the video below.


Black box analysis of a logical vulnerability like this one can turn out to be quite challenging because unlike memory corruptions, no exceptions are thrown that could be caught during debugging and help pinpoint the culprit. But it all turned out well and the released micropatch is a good proof of that.