Two weeks ago SensePost's Etienne Stalmans and Saif-Allah El-Sherei published an interesting analysis of a Microsoft Office feature that can be easily exploited for running arbitrary code on user's computer. In the next few days, Cisco Talos reported of detected in-the-wild attacks exploiting this very issue, while SANS reported it being exploited by Necurs and Hancitor malware campaigns. Endgame's Bill Finlayson and Jared Day subsequently wrote an excellent root-cause analysis of this issue.

The feature in question is called Dynamic Data Exchange, introduced in early Windows systems but still used in many places today. For instance, if you want to see the revenue value from a specific cell in your financial statement Excel worksheet mirrored in a Word document - so that updating the worksheet reflects itself in Word, you can use DDE for that. The field that does that would look like this:

The "AUTO" in DDEAUTO instructs Word to automatically use DDE for updating the external value when the document is opened. Instead of DDEAUTO, one can use DDE, but it will require the user to manually trigger updating of the value.

The documentation on DDEAUTO and DDE fields describes their behavior, including that "the application name shall be specified in field-argument-1; this application must be running." But what happens when the application (e.g., Excel from the above example) is not running? This happens:

Word helpfully offers to launch the application for you, which is undoubtedly user-friendly. It is also where a feature turns into a vulnerability: the application name can be a full path to a malicious executable (on USB drive or network) or to a benign executable that will do malicious things based on the arguments it is provided. So when the user agrees to Word launching the DDE application, attackers code gets executed on his computer.

According to SensePost, "Microsoft responded that as suggested it is a feature and no further action will be taken, and will be considered for a next-version candidate bug." Microsoft is full of smart people who try very hard to keep their users secure (we personally know many of these people) and we believe they have good reasons for such decision - or for subsequently reverting it in case that should happen. In case of DDEAUTO (which is the better attack vector), the user has to provide two non-default answers in popup dialogs, so even if these dialogs are not security warnings, some amount of social engineering would certainly be required in an attack. While we're seeing reports of this feature being used by attackers, we currently don't have any data on how successful they are.

Regardless of Microsoft's position on this, both defense and offense sides sprung into action. The former started looking for mitigations and creating signatures and detection rules for blocking attacks, while the latter kept coming up with new attack vectors (Outlook email, Calendar invites) and ideas on how to bypass detection. A fun game to play, no doubt, but we already know that offense will always be winning. Putting guards around the hole can ever only slow the attackers down, as they will always find ways to bypass them. The only definitive way to prevent the hole from being exploited is to close it. In code. And that's what we do.

The entire problem seems to stem from Word deviating from the documentation and helpfully attempting to launch the application named in a DDE or DDEAUTO field. This is implemented by calling CreateProcess with the provided application name, which covers two cases:


This has two security-related implications. One can obviously just specify a full-path malicious executable, even from a network path, and have it executed on user's computer. (Note that a network path can be on the Internet behind user's firewall, and Windows with the default-running Windows Client Service will download the executable via HTTP - it will just take longer.)

We described this second attack vector to explain why simply blocking DDE/DDEAUTO fields that use a full path would not be enough to fully neutralize exploitation. In fact, this shows that even a benign case of {DDEAUTO Excel "statement.xlsx" revenue} in a trusted (even signed!) document could be used to launch malicious Excel.EXE from attacker's location.

DDE-related application launching in Word is apparently pretty dangerous, and we were tempted to put some security around it. But the more we thought about what to do, the more it became clear that it's impossible to distinguish between a malicious and benign use of DDE/DDEAUTO. We could disallow any forward- and back-slashes in the application name, but as shown above, even single-word application names can be misused. We could also change the current working directory to a safe location before CreateProcess gets called (and we actually already had a patch candidate doing that) but what is a universally safe location on millions of differently-configured computers worldwide?

Then we decided to do some functional testing, and discovered that we were unable to get Word (either 2010 or 2013) to properly launch the requested application at all in any meaningful way. For instance, the following did launch Excel (with binary planting concerns aside):


But that's clearly useless, as no file and range are specified. However, the following, while useful, did not launch Excel. Process Monitor showed a single attempt to launch excel.exe from user's Documents folder (probably because it was the current working directory):

In contrast, the above worked great for getting the revenue value from statement.xlsx when the latter was already opened in Excel on the same computer. And that was it. We decided to simply amputate the app-launching capability for the purpose of DDE.

So we also removed the fallback code. The image below shows the relevant code graph, including the CreateProcess and Fallback blocks, which we effectively amputated. 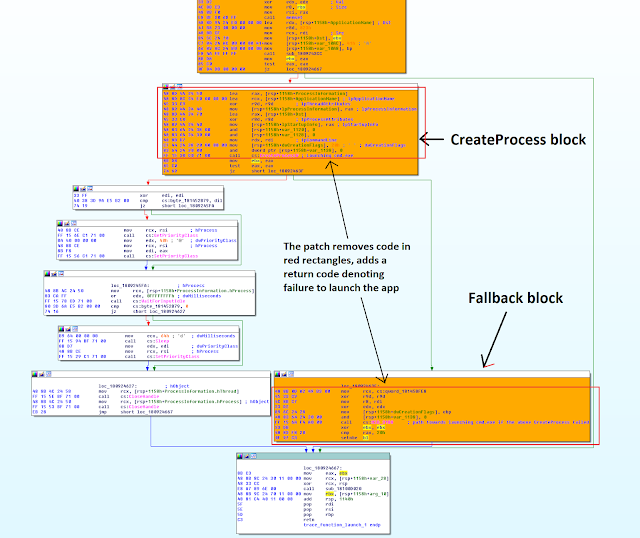 Our first micropatch was for 64-bit Word 2010 with the following source code:

mov eax, 0 ; we say that CreateProcess failed to prevent original code
; from tryig to close the handle of the non-existent process

PATCHLET_OFFSET 0x92463f ; at the beginning of the fallback block
JUMPOVERBYTES 40 ; remove the entire block
N_ORIGINALBYTES 5

nop ; no added code here, we just need to remove the original code

We created micropatches for Office 2007, 2010 ,2013, 2016 and 365 (32-bit and 64-bit builds). To have micropatches applied, all you need to do is download, install and register our free 0patch Agent. (Glitch warning: due to being sandboxed in Word 2016 and 365, 0patch Console either shows an empty line for Word in the Applications list with only the on/off button, or doesn't show Word at all. While said button works as it should, it looks confusing. We're working on fixing this by end of our beta.)


Note that we only make micropatches for fully updated systems, so make sure to have your Office updated (latest service pack plus all subsequent updates from Microsoft) if you want to use them. We'll be tweeting out notifications about additional micropatches so follow us on Twitter if you're interested.

Our micropatch can co-exist with existing mitigations for this same issue, so you can still disable automatic updating of DDE fields (either manually, or using Will Dormann's collection of Registry settings for various Office versions) and use malware detection/protection mechanisms - although the latter will add no value once the hole has been closed.

If active exploitation of this feature continues to spread, Microsoft will likely respond with an update or mitigations. When they do, make sure to apply them - as the original vendor they know their code best, and they are also aware of many use cases none of us could think of.

Should you experience any problems with our micropatches, please let us know. It's unlikely that our injected code would be flawed (being a single CPU instruction), but you may have a DDE use case that doesn't agree with our solution. Send us an email to support@0patch.com if you do. One great thing about micropatches is that in addition to getting applied in-memory while applications are running, they can also get revoked in-memory. So we can revoke a micropatch and issue a better version without your users even knowing that anything happened. Zero user disturbance.

We'll probably always have "fat updates", as there will always be a need for significant functional changes and new features. But fat updates are really not fit for patching vulnerabilities - these need rapid deployment, not weeks or months of testing in user environments that keeps the window wide open for attackers even though official patches are available. Micropatching is the only approach we're aware of that can change that. And that's why we're doing it.

Keep your feedback coming! Thank you!

[Update 3/11/2017: Windows 10 introduced a new mitigation called Attack Surface Reduction with the Fall Creators Update. We took a look at how it helps block DDE-borne attacks and how it compares to our micropatches.]