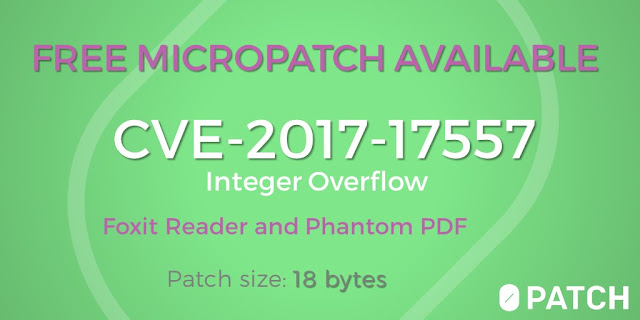 According to our analysis the PoC attached to the report triggers a heap-based buffer overflow in a Bitmap image data copy operation inside ConvertToPDF_x86.dll module using an overlong biWidth attribute.

When dropping SRC-2018-0009.bmp into Foxit Reader we immediately got a crash and inspected it by hooking WinDbg with Page Heap enabled.


It first looked like a typical buffer overflow, where a missing boundary check allows data to be written over the edge of destination buffer addressed by edi. (Note: the crash offset is marked in red.) 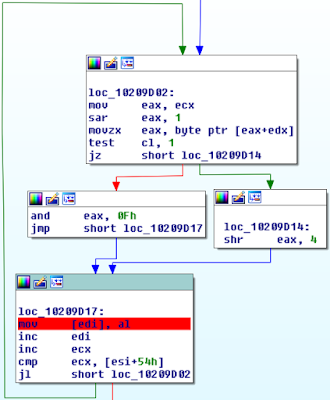 But the loop of the copy operation is constrained by checking biWidth (at esi+54h) which is read from Bitmap image header. So why is there an access violation despite this check?

When inspecting that buffer's properties something stuck out: an unusually small buffer size was reported by !heap to have been allocated, specifically just 4 bytes (UserSize in the WinDbg output below).


Inspecting SRC-2018-0009.bmp in a hex editor revealed that biWidth is set to a huge value of 40000001h - a remotely controllable attribute in case the image used in conversion to PDF was obtained from the attacker. So if biWidth was used in calculation of destination buffer size before buffer allocation, that calculation was probably prone to integer overflow in order to result in so much lower a value (4).

Besides heap block properties, !heap also printed out the buffer allocation call stack. We inspected that and indeed we found an overflow-prone buffer size calculation right before the orange-marked return address in the above call stack. The code graph below shows only a part of the vulnerable execution path, but the omitted code is very similar so it suffices for our explanation. There are three code blocks; edi represents biWidth read from image data in the first block, in the third block eax is the destination buffer size to be allocated, ecx represents biBitCount (number of bits per pixel). 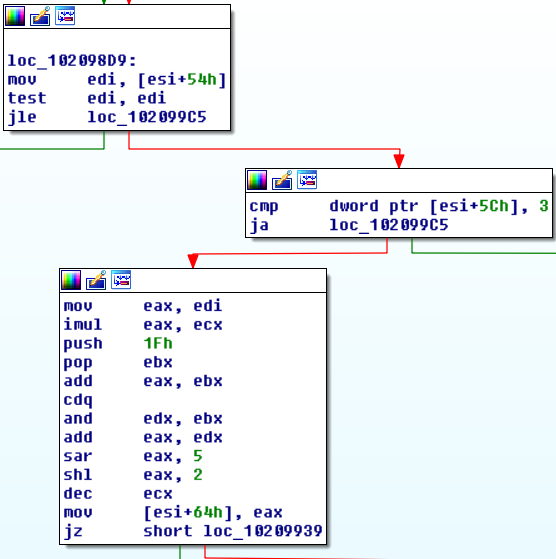 There are 3 instructions that can overflow in the last code block:


As already said, this is not the only vulnerable code block before the destination buffer allocation. Depending on biBitCount value that can hold at most 20h two other similar buffer size calculations can occur. In order to fix all of them, many checks would have to be inserted so we decided for a more compact solution. Given that all constraints to the buffer size calculation are known - buffer size can not theoretically exceed 0xffffffff, biBitCount can be at most 20h and two potentially added values are at most 1Fh -, the maximum valid biWidth could be calculated beforehand as follows:

However, one of the vulnerable blocks does not properly handle signed values so this also needs to be taken into account by halving the maximum buffer size to 0xffffffff/2 = 0x7fffffff. Once we do that, the add eax,edx instruction can't overflow because edx is the sign extension (mind the cdq instruction) and will always be 0. So the final constraint calculation goes like this:

Knowing this, a single check can be placed right before biWidth is first used - at the first block of the code graph above - that makes sure only biWidth values lower than 0x03ffffff can pass. If this condition is not met, we can set biWidth to 0 so the subsequent jle would raise a handled exception and abort further processing of a malformed image. Here is the patch code that does this:


This micropatch has already been published and distributed to all installed 0patch Agents. If you're using Foxit Reader or Foxit PhantomPDF version 9.0.1.1049, you can download our free 0patch Agent, create a free 0patch account and register the agent to that account to immediately receive this micropatch and have it applied to your Foxit software.

If you're using some other version of Foxit Reader and would like to have micropatches for it, please contact us at support@0patch.com.