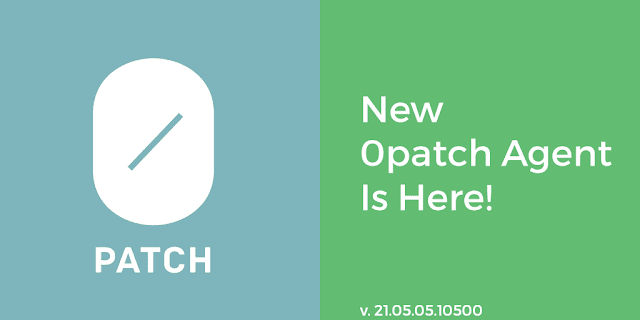 Today we released a new version of 0patch Agent that fixes some issues reported by users or detected internally by our team. We always recommend keeping 0patch Agent updated to the latest version, as we only support the last couple of versions; not updating for a long time could lead to new patches no longer being downloaded and agent not being able to sync to the server properly.

Enterprise users can update their agents centrally via 0patch Central; if their policies mandate automatic updating for individual groups, agents in such groups will get updated automatically.

Non-enterprise users will have to update 0patch Agents manually by logging in to computers with 0patch Agent and pressing "GET LATEST VERSION" in 0patch Console. We're still offering a free upgrade to Enterprise so any PRO user can request Enterprise features by contacting support@0patch.com.

The latest 0patch Agent is always downloadable from https://dist.0patch.com/download/latestagent.

An enormous THANK YOU to all users who have been reporting technical issues to our support team, some of you investing a lot of time in investigating problems and searching for solutions or workarounds. You helped us make our product better for everyone!

WARNING: We have users reporting that various anti-virus products seem to detect the new agent as malicious and block its installation or execution. Specifically, Kaspersky detects the MSI installer package as malicious (preventing installation and update), while Avast and AVG detect 0patchServicex64.exe as malicious (preventing proper functioning of the agent). We recommend marking these as false positives, restoring quarantined files and making an exception for these files if affected.