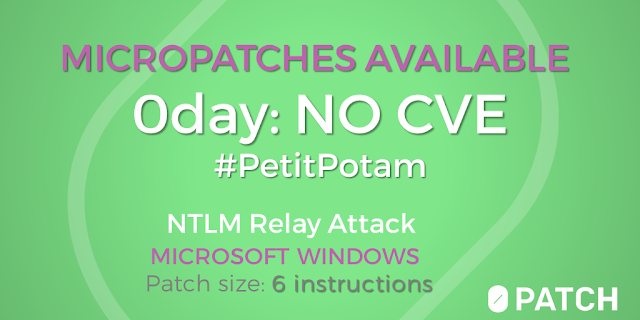 Update 8/11/2021-B: Neither Microsoft's August fix nor our micropatch seem to have covered all PetitPotam affected code. Both fixed the anonymous attack vector but we're investigating additional authenticated paths now and looking for the best way to patch that too. The most effective PetitPotam mitigation currently remains this RPC filter on all Domain Controllers, although it may be an overly broad measure and could break something, so proceed with caution.

Update 8/19/2021: After further analysis of additional PetitPotam attack vectors, we created additional micropatches that block all these vectors. Today's PetitPotam patches are written for executables from August 2021 Windows Updates, which means you have to have these updates installed (i.e., fully updated Windows as of this writing) in order to have them applied.

Update 9/15/2021: September 2021 Windows Updates did not bring any changes regarding the new PetitPotam attack vectors, so our micropatches remain free.

PetitPotam was discovered by security researcher topotam, who published their proof-of-concept on Github on July 20, 2021. There is no official vendor patch for it at the time of this writing; in fact, Microsoft's support article implies they do not consider this a vulnerability but rather a mis-configuration, and provides some generic mitigations that do not address the root issue.

As usually, CERT/CC vulnerability note by Will Dormann nicely explains the vulnerability and an exploit chain leading to a complete domain takeover. The main problem is that any user - even anonymous - can force a domain controller to send NTLM credentials of its computer account to attacker's server, where these can be received and then relayed to another service in the domain to make a malicious privileged request.

We took a look at what goes on in the code when an EfsRpcOpenFileRaw request is received by the server. It is function  EfsRpcOpenFileRaw_Downlevel in efslsaext.dll that processes this request. This function has most of its code enclosed in an impersonation block between a call to RpcImpersonateClient and a call to RpcRevertToSelf. Code inside this block is being executed under the identity of the requesting entity (in our case, attacker), while code outside executes as Local System, i.e., the computer account.

Unfortunately, function EfsRpcOpenFileRaw_Downlevel, outside the impersonation block, makes a call to EfsGetLocalFileName, which tries to open the attacker-supplied UNC path. By doing so, it sends local computer's NTLM credentials inside the SMB request to the remote network share. If the attacker is waiting on the other end, they get these credentials.

Let's take a look at relevant parts of function EfsRpcOpenFileRaw_Downlevel:

Note that only this call to EfsGetLocalFileName is non-impersonated, while core EFSRPC functionality executes under requester's identity. This means that anonymous or unprivileged user cannot remotely execute EFSRPC functions such as reading or creating arbitrary network files.

Our micropatch extends the impersonation block such that it now encloses the previously un-impersonated call to EfsGetLocalFileName; as a result, the SMB request which this function triggers contains attacker's NTLM credentials instead of computer account's. Therefore, in case of an anonymous request the attacker gets credentials of the ANONYMOUS LOGON user (which are of no use), and if they use credentials of a Windows domain user, the acquired NTLM credentials will be of that same user (which they already have).

code_start    ;Injected at the top of the block containing
EfsRpcGetLocalFileName, in the EfsRpcOpenFileRaw_Downlevel
function
mov rcx, 0        ;Set rcx for RpcImpersonateClient to 0, so it
impersonates the current client
call PIT_0x53370  ;Call RpcImpersonateClient
mov rbx, rax      ;Move the result to rbx, so it can be used for error
reporting in case of failure
cmp rax, 0        ;Check if impersonation failed
jne PIT_0x288c    ;If failed, jump to error block
code_end

code_start  ;Injected at the top of the block right after the
RpcRevertToSelf call, in the EfsRpcOpenFileRaw_Downlevel function
call PIT_0x563b0    ;Call RpcRevertToSelf to stop impersonating
code_end

Let's look at the difference between running the PetitPotam tool against a fully updated Windows Server without and with 0patch.

Let's see which user executes the call to EfsGetLocalFileName: 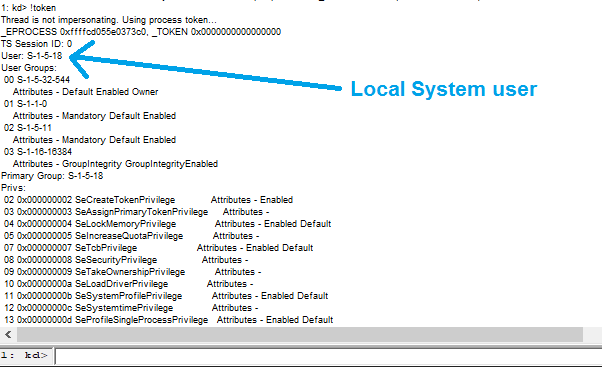 Let's see which user executes the call to EfsGetLocalFileName this time: 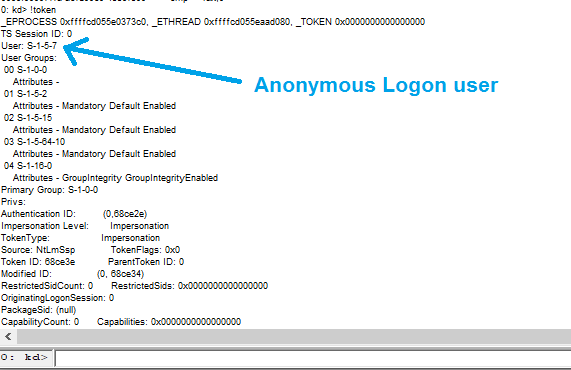 Good, it's the Anonymous Logon user, which is useless to the attacker. Consequently, the PetitPotam attack doesn't work anymore:

Micropatches for this vulnerability are, as always, automatically downloaded and applied to all affected computers (unless your policy prevents that), and will be free until Microsoft has issued an official fix. If you want to use them, create a free account at 0patch Central, then install and register 0patch Agent from 0patch.com. Everything else will happen automatically. No computer reboots will be needed.

Compatibility note: Some Windows 10 and Server systems exhibit occasional timeouts in the Software Protection Platform Service (sppsvc.exe) on a system running 0patch Agent. This looks like a bug in Windows Code Integrity mitigation that prevents a 0patch component to be injected in the service (which is okay) but sometimes also does a lot of seemingly meaningless processing that causes process startup to time out. As a result, various licensing-related errors can occur. The issue, should it occur, can be resolved by excluding sppsvc.exe from 0patch injection as described in this article.

Update 8/19/2021: Microsoft's August 2021 updates brought a functionally similar fix as our micropatch, but since other attack vectors were subsequently discovered, we have issued additional micropatches that apply on top of August 2021 Windows executables. In order to use them, you have to have August 2021 Windows Updates applied. In addition, we have found Windows Server 2012 to be affected to these additional vectors and have also covered this Windows version with our new micropatches.

Let's take a look at this fix. 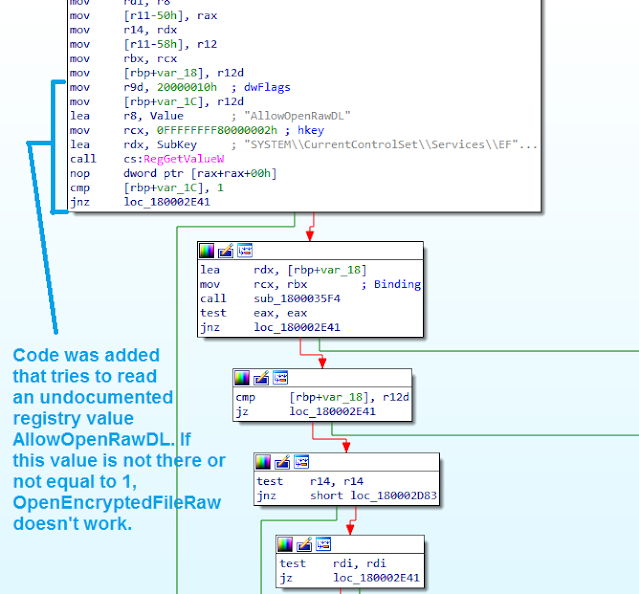 Microsoft's fix is in the same function as our micropatch ( EfsRpcOpenFileRaw_Downlevel in efslsaext.dll), but it sabotages the function so it doesn't work anymore. We actually also sometimes sabotage an entire function if it seems that could affect such a small amount of users that the benefits would outweigh the risk. In fact, we were initially inclined to do it here too as we were unable to find any backup product or mechanism that would be using this function - but then decided to rather fix the obvious bug we had noticed, and keep the function "alive".

Note that Microsoft's fix also includes a hidden undocumented feature: instead of outright sabotaging OpenEncryptedFileRaw, the fix checks an undocumented registry value AllowOpenRawDL (DWORD) under HKEY_LOCAL_MACHINE\SYSTEM\CurrentControlSet\Services\EFS; if this value exists and is equal to 1, OpenEncryptedFileRaw works as before. Therefore, if Microsoft's fix broke your backup, you can disable it using this value, but doing so will make you vulnerable to the PetitPotam attack.

We find this Microsoft's fix to be appropriate and therefore do not plan to port our PetitPotam micropatch to the August 2021 version of efslsaext.dll unless 0patch users come complaining the fix broke their backup. We also invite any Windows users whose backup got broken by August 2021 Windows Update to contact us at sales@0patch.com.

Update 8/11/2021: Neither Microsoft's August fix nor our micropatch seem to have covered all PetitPotam affected code. Both fixed the anonymous attack vector but we're investigating additional authenticated paths now and looking for the best way to patch that too.